An Introduction to Equalization - A Free Guide from Audio Masterclass

An Introduction to Compression: Basic Compression - A Free Guide from Audio Masterclass

Fixing a problem note with Auto-Tune

Why process a whole vocal track when there is only one note that is out of tune? Sometimes surgical precision can be better than a brute force strike.

As you know, Auto-Tune is a wonderful aid in correcting the pitch of a slightly out of tune singer. It is also used as an effect in its own right, but for today I am only interested in correcting pitch.

Often Auto-Tune is treated with a degree of disrespect by people who think that singers ought to be able to damn well sing in tune. Well people can think what they like. All I know is that Auto-Tune can often improve a vocal significantly. And since we live in an era where Auto-Tune is routinely used in professional production, then everyone else needs to use it to keep up. Unless you're working with a singer who genuinely sounds better without Auto-Tune, which many do, in which case enjoy the experience (while it lasts).

What is often not properly understood is that for Auto-Tune to work, the singer has to hit notes precisely within half a semitone. For instance if the note required is E and the singer veers more than half a semitone sharp, then Auto-Tune will think that he or she was aiming for an F and 'correct' the note to F. Setting a key rather than using the default chromatic setting will help, because this will eliminate any notes that are not in that key. So for instance in the key of C major, if the singer intends a D, he or she has almost a whole semitone of leeway either up or down and Auto-Tune will still correct to a D. But this doesn't work for an E that is too sharp, an F that is too flat, a B that is too sharp, or a C that is too flat. This is because between E and F, and B and C - all of which are notes in the key of C major, there is only a semitone gap.

Clearly we are not dealing with the best singer in the world, and by his own admission! But it doesn't sound all that much out of tune, so what is the problem?

Well if you listen closely to the 'my' that starts the second line, it's dodgy. Definitely dodgy. It's supposed to be an A, the same as the next word 'audience', but it is definitely on the sharp side of the intended note.

So let's Auto-Tune it! I'll open up Auto-Tune and let it do its stuff using the default settings. The only thing I've changed is the Input Type to Alto/Tenor rather than the default Soprano. (You can click the image for a larger version.) 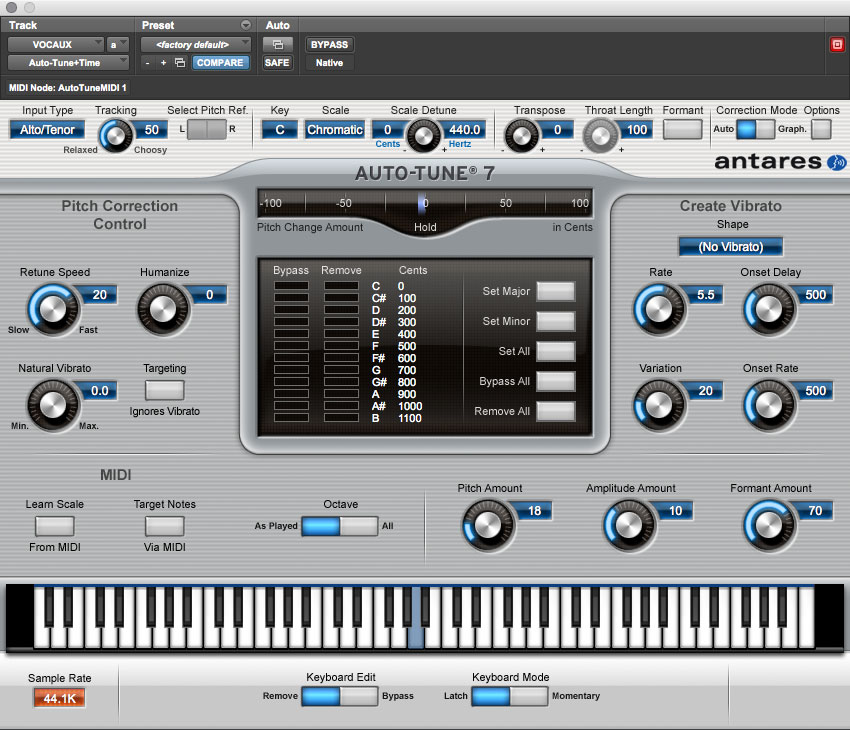 While the other notes are now more precisely on pitch, the problem note hasn't changed at all! This is because Auto-Tune is set to a chromatic scale (in which the key doesn't matter in equal temperament tuning) and it thinks the offending note is meant to be A#.

Fortunately the solution to this particular problem is simple - set the key to A major, which is the key of the song. In this key A# doesn't exist, so as long as the singer doesn't stray too far towards B, then Auto-Tune should pull the note down to A. 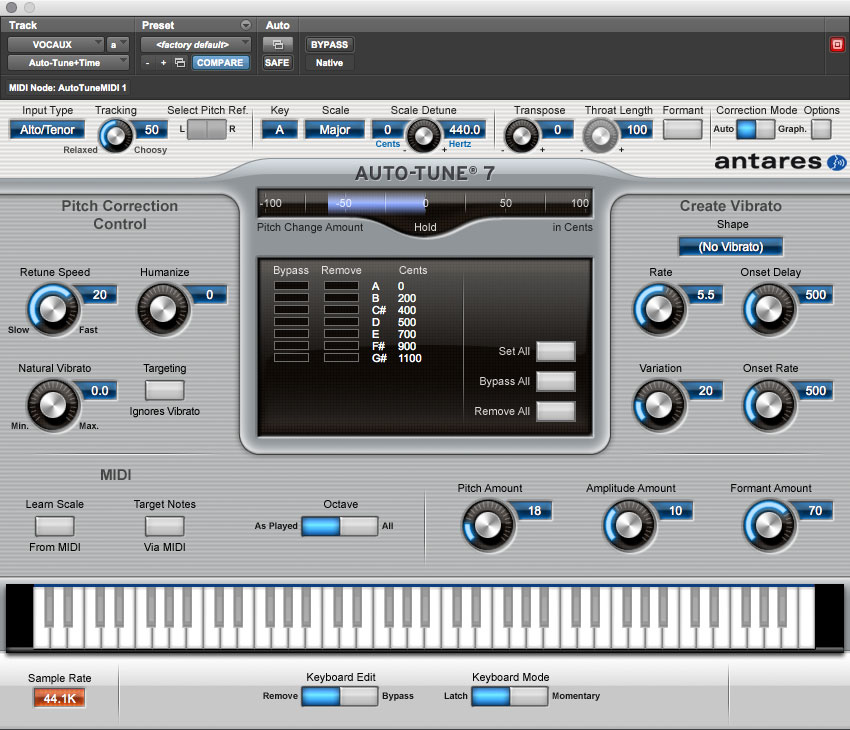 So problem solved! That was easy. But...

Solving one problem creates another

This is a simple song and the simple solution provided by Auto-Tune is probably fine as it is. But there are further points to consider.

The first important point is that apart from the one problem note, the vocal isn't all that bad. So why correct all of the other notes when they don't need correcting? It's only going to take the life and humanity out of the performance and make it sound more like a machine.

The second point is that although this song is simple, other songs are not. If there are any changes of key then Auto-Tune will correct to the wrong key after the change. You would have to automate the key changes in Auto-Tune. Automating key changes is easy enough with a little patience. But what if the song is more chromatic? Or - heaven help us - in a mode other than the common major and minor or any of the other scales Auto-Tunes provides? Or what if it is in the harmonic minor, which my version of Auto-Tune doesn't have? (The harmonic minor scale of A has a G#, which Auto-Tune's A harmonic minor doesn't.) Or what if the song uses the melodic minor where in the key of A there is a G# on the way up and G-natural on the way down?

I think you will see that it often isn't possible just to open up Auto-Tune and expect everything to be fixed just like that. And in this case there is only one note that is a problem.

Just fix the one problem note

If just one note is the problem, then just fix that one note. The problem can be solved without affecting anything else. One way to do this would be to automate the bypass button. That is a perfectly viable option that you're welcome to use. But there is another interesting way to do it, which really does only affect the one problem note, and doesn't consume system resources once done.

Let's focus in on the one note that is the problem. For context I have included the whole line. I've also soloed the track rather than use the source file so that it sounds the same as it does in the song. You will hear a couple of bumps in the audio which are probably faint mic pops, but this take was chosen for the performance ahead of small technical issues that are not heard in the mix.

Listening to this on its own it doesn't sound too bad. But I can assure you that when you've listened to this song enough times, that problem note is definitely closer to an A# than it is to A.

What I am going to do here is process the audio in the track. Pro Tools has an 'AudioSuite' feature that makes this kind of processing easy. Other DAWs can do the same through 'bounce in place' and similar features. Or you can just bounce and re-import, which any DAW can do. I'm going to process this much of the audio, which includes the problem note and the first syllable of 'audience'...

Here is the Auto-Tune window... 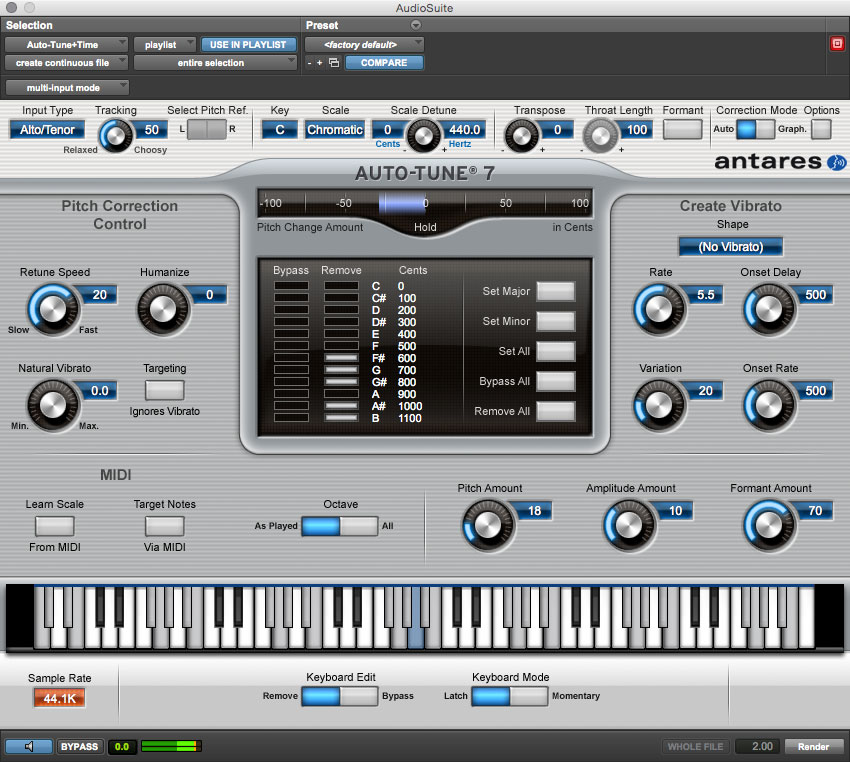 What you will notice if you look in the central area is that I have removed some notes. These are notes that Auto-Tune will now not retune to. So whatever I put in with these settings it will never retune to any of the highlighted notes. I could have just removed A#, but often when I use this method I just want to kill everything but the required note just to be sure. Once these settings are in place, I can audition with the speaker icon in the bottom left, then render the result back into the track.

So here we can see the Auto-Tuned section to the left, the original audio to the right. It sounds like this...

Oddly enough in this example the click I expected at the edit isn't too bad and is not much worse than the other bumps I mentioned earlier. But normally the click is very clearly audible and you should expect it. That's why I processed more of the audio than I needed to correct. What I can do now is drag back the edit so that the corrected version is only heard when it is needed, on 'my'. I've put in a very short crossfade between the sections.

To my mind this now completely fixes the problem. I've listened to the track many times since and it no longer annoys me.

This technique of processing the audio in the track is very useful for short one-off problems. The trick is always to process a wider area then you need, then you can pull back the start and end points and crossfade in and out. And once the processing is done, you don't need the plug-in to be running any more so you're not consuming system resources unnecessarily.

When there is a short-duration problem in a track, it may be more practical to fix it in place, rather than have a plug-in running all the way through the session. The results can be more precise and 'surgical', curing the problem without affecting anything else.

Subscribe to access our latest, up-to-the-minute articles with hints, tips and adventures in audio in the weekly Audio Masterclass Newsletter. Get subscriber-only info and special offers too...